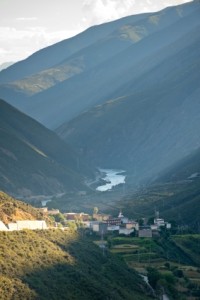 Shilajit is known as a the legendary panacea attributed with many magical properties.

In regional folk medicines Shilajit has a reputation of being the most powerful anti-aging and rejuvenating substance ever known to humankind. It is believed to increase the core energy responsible for sexual and spiritual power as well as to slow down the process of aging and prolong life.

For the longest time the origin of Shilajit was a subject of much debate. It is collected as a black or brown bitumen-like semi-liquid tar that seeps out of certain rocks high in the mountains during the hot summer season. It is found predominantly in the Himalayan region running through India, Nepal, China, Tibet and parts of central Asia. The most accepted theory today is that it is a nutrient-rich organic matter from prehistoric vegetation  captured by tectonic movement and transformed by pressure and heat within mountain formations.

Shilajit is one of the main remedies of Ayurveda where it is used to treat a wide range of conditions such as ulcers, asthma, diabetes, rheumatism, allergies, arthritis, hypertension, obesity, various digestive and urinary problems and more. Regular consumption of small amounts of shilajit is believed to result ingeneral physical strengthening, optimized functioning of all body systems,faster injury healing, and enhanced brain functioning.

Indian medical texts dated thousands of years back claim that there is hardly any curable disease which cannot be controlled or cured with the aid of Shilajit. In Sanskrit shilajit means “the conqueror of mountains and destroyer of weakness”.

Shilajit is known for its aphrodisiacal properties. It is said that the emperors and kings of great empires of the past used Shilajit on a regular basis so they could maintain their youthful vigor and sexual power even in old age. Shilajit is mentioned in the Kama Sutra. Today Ayurvedic doctors widely prescribe it in the case of low sperm count, infertility, impotence, premature ejaculation, and many other types of sexual disability.

So far, research data seem to confirm many of the Shilajit properties which constitute its legendary reputation as a universal elixir of youth and health.

Shilajit is included in most of Isagenix wellness solutions as one of the components of the restorative and rejuvenating tonic Ionix Supreme.

Try a 9 Day Cleanse to Look Your Best Fast!

Or just because you are ready to make a change …

Feel the difference and see it in the mirror in less than two weeks!

What’s Aging You? What can you do?

What helped Christie Brinkley to look half her age at 60 years old?

Sources of Protein in Protein Supplements – Which Shake, Bar, or Powder is Best for You?